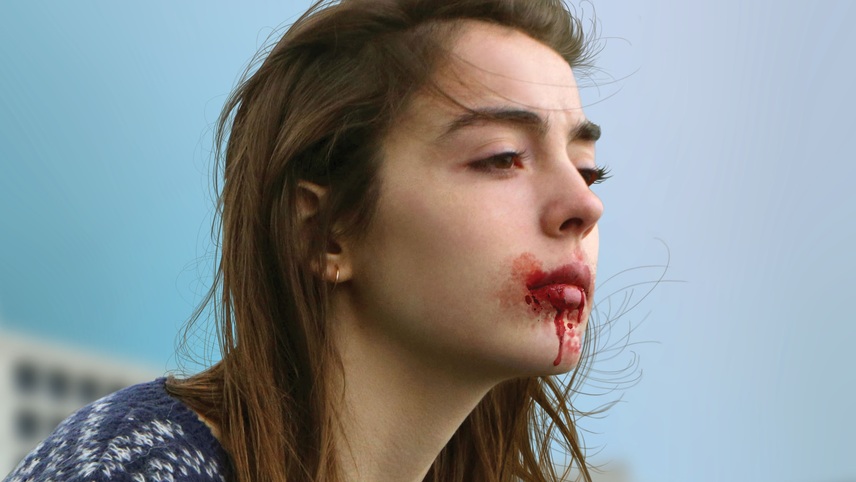 Food is an essential part of everyone’s life, and its primary purpose is to provide the nutrition that is necessary for the existence of any human being. However, throughout history, the concept of food has been appropriated by different cultures, and therefore acquired a variety of new meanings that could serve to indicate an individual’s position in society. One’s eating habits unconsciously signify class, religion, politics, and our experience of food shifts from real to symbolic, where the simple need for nutrition gets lost in the process of interpretation of hidden meanings and codes. The grotesque and abject film Raw (2016) by Julia Ducournau explores the concept of the food chain, consumption, and true nature in its body horror adaptation of the coming-of-age genre.

The film’s plot follows Justine, an introverted and socially awkward sixteen-year-old, who is leaving her family home to start her first semester at the Veterinarian Academy, which has been attended by all of her family members. Justine’s mother appears to be a prudish and conservative woman, who is obsessed with not only protecting her daughter’s strictly vegetarian diet but also Justine’s innocence. On the other hand, the older sister – Alexia, who left the family home earlier, and appears to be a rebellious child, is reluctant to connect with her overbearing parents, even giving up her vegetarianism.

At the same time, it is easy to be sympathetic towards Justine, as she appears to be frightened and uncomfortable by the fast-paced and intrusive environment around her, which is more similar to a zoo rather than a prestigious Academy. Being lost in the process of adaptation to the rules and hierarchy of a new place; Justine’s experience reminds me of the first time I arrived in Canada. Being without your family is a stressful experience, especially when you are unfamiliar with the culture and setting of the place. As one is accustomed to certain meals or products that are associated with the comfort of home, one of the harshest parts of transitioning is the absence of food I was used to eating. Being submerged into a new and unknown environment, Justine no longer has the support from her mother, who would have stopped the upper-class students from forcefully feeding her rabbit kidney as a part of the initiation process. Even her sister, the only person Justine can rely on, in this unwelcoming setting, proves to be only concerned with her image and status, even if it means humiliating her sibling. While the beginning of the film demonstrates Justine as innocent and quite pathetic, invoking an emotion of pity, as the plot gains speed, the appearance of Justine at the Academy proves to be more dangerous for others than herself.

Perhaps something that we, urban citizens, do not often think about with the abundance of grocery stores and prêt-à-manger meals is the concept of the food chain, where one either has to be a hunter and consume the other or has to become prey and be consumed. The world of the Veterinarian Academy demonstrates a perfect example of the food chain. The first-year students are herbivores, being preyed upon and controlled by their upper-classmen, where they are quite literally tested on and penalized for the amusement of the frat-like structure. Whether it is being forced to wear certain clothing to class or performing embarrassing tasks, with penalties varying from wearing a diaper to physical punishment, the new students are fully controlled by their supposed mentors. Justine is the last link in the symbolic food chain. Not only is she unaccustomed to the Academy’s norms, but she also manages to embarrass herself quite frequently, which encourages others to either ignore or mock the unsociable girl. However, everything changes, after Justine gets a taste of the (raw) meat she has been deprived of by her family. The consumption of the rabbit kidney in the baptism-like initiation process opens up a Pandora’s Box of endless gastronomic and sexual pleasure for Justine. Quickly her hunger evolves into an object of desire towards her queer roommate Adrien, just another unlucky guy at the party. Justine gives in to her animalistic instincts. She goes on a hunting spree with Alexia, who turns out to have the same cravings as she attempts to teach Justine how to control and suppress her hunger for human flesh.

While in the everyday life human beings are considered to be on the top of the food chain, thanks to their technology and development, Raw proves that they do not stand a chance against the cannibalistic insatiability of Justine and Alexia. Even though Justine is at the very bottom of the Academy’s hierarchy, her newly discovered nature provides her with certain inner superiority over those who abused her. Even if she cannot stand against them as the freshman, she can always make them disappear through fulfilling her hunger. The film presents a twisted version of a coming-of-age story, where food, specifically human flesh, becomes an obsession that is paralleled with the sexual gratification that Justine is getting from both having intercourse with her roommate and attempting to consume him. The more Justine attempts to suppress her desire, the stronger it gets. One can see how the concepts of puberty and sexual awakening are conveyed through Justine’s animalistic hunger, who briefly loses her humanity while being intoxicated and is baited to bite a corpse’s hand during a party. The facade of vegetarianism, carefully preserved by her mother and father turns out to be a protective mechanism invented to protect the others from Justine.

Through exploring the taboo topic of cannibalism, Julia Ducournau is levelling all the humans in the film with the animals that they are supposed to study. Ducournau demonstrates that while people are intelligent, educated, have unique personalities, and are loved by someone, in the end, they are sustenance for someone like Alexia who consumes Justine’s roommate and love interest. The ending demonstrates the mutual understanding between the sisters, where Justine learns to accept her nature and realize that someone like Adrien is just food or collateral damage at the end. Raw does not only twist one’s perception of the coming-of-age genre but forces one to question human nature and what we have been accustomed to. When someone like Justine, a seemingly harmless socially awkward teenager, turns out to be the very thing one should be afraid of. The physical insatiability of Justine and Alexia, which both sisters attempt to fulfill or suppress with sex, alcohol, or animal meat, finally unleashes itself at the end, leaving Adrien dead and partially consumed by the older sibling. Proving that even though they are both aware of the legal consequences of their actions, they still prefer to stay true to their nature and family. The film might come across as vegan propaganda, as humans nourish and consume other humans, just like us with farm animals. However, if familiar with the works of Ducournau, especially her latest success Titane (2021), the director presents individuals in the opposition to the radical majority to reveal that no one can escape their true identity, no matter how well they try to hide it.