The Divine Fist of the North Star (1983-88) is a kick-ass manga series later adapted into an anime (1984-88) that follows a young man named Kenshiro who carries the legacy of a 2000-year-old assassination art that guides him towards his destiny as the saviour at the world’s end. After nuclear war ravaged the planet, civilization in 199X falls into chaos and destruction, where powerful forces seek to dominate this new era through extreme brutality and ruthlessness. Kenshiro (or Ken), as the inheritor of the Divine Fist of the North Star, is the only one powerful enough to defeat the most formidable adversaries and the hopelessness that plagues surviving populations. 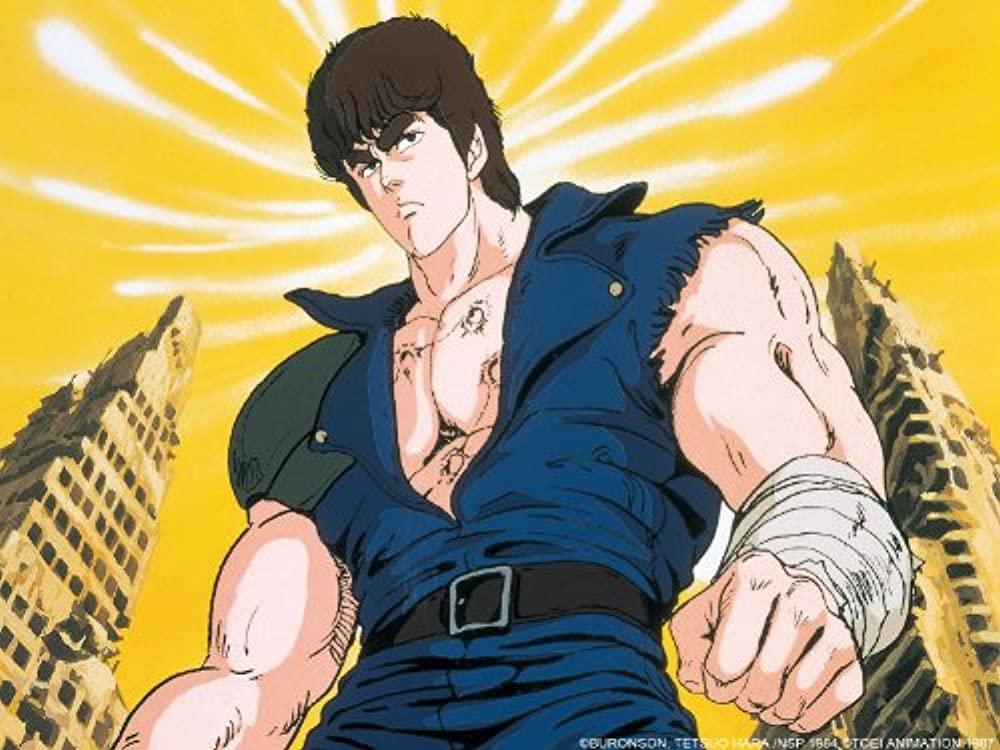 Characterized after Bruce Lee’s iconic kung fu fighting style in the 70s and inspired by George Miller’s post-apocalyptic landscapes in Mad Max, Ken drifts through the desolate wastelands in the ruins of buried cities where the weak and helpless gather. Desperate to cultivate a means to survive, the masses seek safety, away from the bloodthirsty droves of egotistical, power-hungry maniacs that stop at nothing to get what they want whatever the cost. These villains that seek to possess Ken’s great power for their own insidious designs, challenge him time and again, underestimating the great burden and honour the Divine Fist of the North Star carries.

Struck by how attentive the series was (at the time) to the consequences that nuclear destruction would have on the land, animals, and people, the series hones in on scavenging food and water for survival. It may seem mundane, but even the toughest or craftiest villains that Ken comes across aim to destroy, hoard, waste, or hold resources hostage from entire villages in order to exploit them in some way. From our most primary, basic needs to our most frivolous wants and ideals, Fist of the North Star presents the dregs of the old era that continues to cannibalize itself; where food and water were transformed by consumption, the creation of waste became indulgent, and convenience mattered more than survival.

Susan Napier writes that within the apocalypse or dystopian genre in anime:

These notions [of the end of the world] encompass not only the subtext of revelation and images of mass destruction but also such deeper archetypal structures as an obsession with a “grotesquely exaggerated vision of death and desire,” messianic figures who deliver the powerless from terror or oppression often in a form of revenge fantasy, and an ambivalent or negative attitude toward history and temporality in general. (196)

Of course, Ken’s deadly martial arts, which strike his foes’ vital pressure points and obliterate the target from the inside-out, and his Christ-like healing abilities are what we’re all here for. But when a Chinese martial arts, macho-man anime connects the dots between the spectacular unravelling of a globally-manufactured apocalypse within its history to what also seems to appear to be our own present-day, patriarchal settler-colonialism’s obsession with power is compelling. Especially with the threat of nuclear devastation, on top of the climate crisis, that only serves to feed elite capital-consumerist interests, while natural disasters, war, and resource scarcity affect the exploited, homeless, and helpless first. In a not-so-distant dark fantasy of the future, food security, to me, marks the beginning of an end. A point of no return.

After surviving the initial waves of the nuclear apocalypse, Ken and his fiance Yuria both dream of a revived future together; Yuria carries seeds that have the potential to sustain the remaining human population while Ken protects them as they search for fertile ground. Suddenly, Ken’s former friend and rival, Shin, one of the South Star Sacred Fists of the Southern Cross Style appears. Proclaiming that Ken is unworthy of being the successor to the Divine Fist of the North Star in an age of terror and that he has always been in love with Yuria and uses her as a hostage. Knowing that the prophecy says that calamity will erupt if the North and South Stars clash, Shin tortures Ken, marking him with seven scars on his beefy, chiselled torso, in the shape of the Big Dipper with his bare hands. Shin then captures Yuria leaving Ken to bleed out in the desert to die.

Haunted by Yuria’s capture and Shin’s betrayal, Ken is found collapsed just outside of a village and imprisoned until saving a village, as well as, his new young companions Bat and Lin from a gang seals his fate. Across the deserts, word spreads that Shin is building an army and collecting slaves for his empire and will destroy anyone who resists his will. But the same token, the courageous deeds of the Divine Fist of the North Star spreads hope but also signifies an omen of calamity foretold by its predecessors.

Now wandering from place to place in search of Yuria, Lin chooses to take over Yuria’s mantle as the seed bearer while Bat carts them around in his buggy across the empty landscape. Though Bat and Lin have no real connection to Ken other than experiencing his awesome might, feeling his warm kindness, and witnessing his good deeds, they depend on Ken as much as he depends on them. “In Japanese animation, it is most frequently the children who are sacrificed in a world where traditional society seems increasingly absent or meaningless.” (Napier 198-9) Ken defends the weak, sacrifices himself for the needy, and contends with doubt, anguish, and tragedy for the children’s future. And this means challenging those who would oppose this to the death – though not without uncovering their true intentions first.

As there can only be one inheritor of the Fist of the North Star, Ken must also (in time) come up against his brothers whom he grew up and competed with for the title. Not only tasked with defeating his enemy Shin, Ken must seal the fists of his brothers who are also versed in the deadly martial arts.

Familial conflict is another theme that Napier traces in Japanese post-apocalypse narratives and how:

The end of the world is often imagined in fast-paced, dizzying flurries of images. However, even the most overtly postmodern ones show a bitter awareness of a lost past, usually signified by images of parental abandonment or a yearning for a world of pastoral harmony. Apocalypse in Japan seems both personal and suprapersonal, a disaster visited upon both individual and the collective, often metaphorically expressed in the disintegration or even the transgression of the family. (199-200)

And Fist of the North Star is no exception to this as the events of the apocalypse that Ken has survived now lead him to face Raoh, Toki, and Jagi. Later on, it is revealed that Raoh, also known as Ken-Oh (King Fist), who also wields a terrific and terrifying Hard Fist Style has conquered most of the remaining human populations. Toki’s reputation as a gentle, but serious man, a master of the Soft Fist Style, is sullied by a pretender. And it is later revealed that Toki sacrificed himself for Ken, Yuria, and countless children as the apocalypse was just beginning – though not unscathed, Toki is terminally ill and wishes to defeat Raoh alongside Ken with the time he has left. And Jagi, a Judas archetype, betrays Ken at every step of the way, though Ken wrestles with his feelings of brotherhood and what his destiny calls him to do.

Taking a step back, the series maps out how patriarchy becomes synonymous with destruction by pursuing a power greater than what one can capacitate, which has disastrous consequences. And it’s told at the beginning that the one who carries the sign of the North Star calamity will follow – that even Ken cannot escape. Perplexed about the current state of affairs and the direction things seem to be going in, I have been preoccupied with what Napier terms apocalyptic visions in her text. Though we don’t have a North Star that can predict the future, we do have telling signs of what’s to come if we carry on the same destructive path. With the last of old-growth logging in Fairy Creek and the deforestation of the Amazon, (non-Indigenous) overfishing production, soil erosion, species extinctions, fresh-water shortages, and hellish wildfires are a consequence of what Nixon calls the slow violence, around us. And this same logic is shown throughout Fist of the North Star as the villains who lie, steal, and murder, others only to satisfy their immediate desires or fantasies without thinking about what the future will cost.

In Kazuo Umexu’s manga horror classic The Drifting Classroom (1972-74) envisions a bleak future where a junior high school is transported into a post-apocalyptic future where only sand and a void across the horizon exist. The young students are forced to fend for themselves when the adults lose their minds though they must face with death, attacks from insects, and eventual starvation when they realize that nothing can be planted in the sand. Anything that is planted is tainted – the still-present effects from the age they came from.

Anxieties surrounding food’s potential futures can’t all be made known to prepare for every single situation that you could come across. The best solution is to defend the land we still have, the beings and non-beings that depend upon us to protect them not just for their survival, but for ours as well.