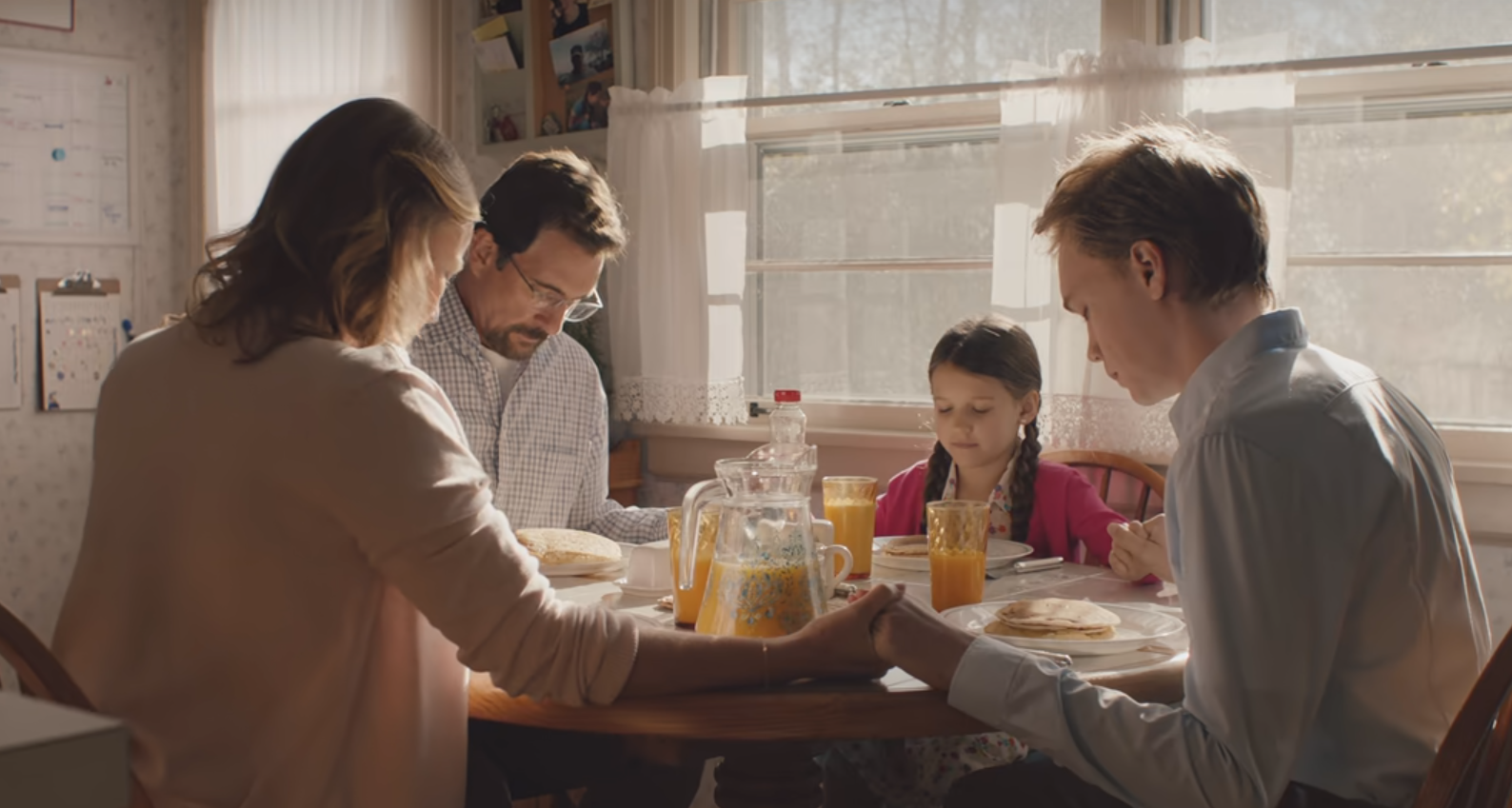 As a boy growing up in a sexist environment, my experience with patriarchal violence was often abstracted, rationalized, and ultimately hidden. There were so many ways in which I, and people who I knew to be good people, were complicit in perpetuating patriarchy without even realizing, simply by being a silent bystander. As a child, I only thought of sexism as an interpersonal problem. I had yet to realize that sexism, and patriarchal violence was built into just about every societal institution I had ever encountered. Once the realization did occur, I was soon forced to accept that simply being aware of these problems, without actually changing how I interacted with them, would make me just as complicit as simply ignoring or rationalizing the problem. This is why the film The Clovehitch Killer (2018, dir. Duncan Skiles) feels so unique to me. It uses the horror genre to examine the adolescent discomfort of being confronted with the ugly side of one’s community, and the complicity that one feels for having ignored the problem. By focusing on the Killer’s son, the film examines how this complicity can be reconciled by creating a better community and rejecting the problematic elements of the life you inherited.

The Clovehitch Killer follows Tyler Burnside, a 16-year-old boy living in a small town in Kentucky. He is ostensibly a good kid, he doesn’t get into trouble and he serves his community through his Boy Scout troop and his church. After finding a pornographic image in his father’s pick-up truck, he begins to suspect that his father, Don, may be connected to a series of murders that has haunted their small town for over two decades. In his inquiry into his father’s connection to the Clovehitch Killer, Tyler befriends Kassi, a social outcast who, as a result of her mother being one of Clovehitch’s victims, has an obsession and an extensive knowledge about the murders. Tyler becomes increasingly alienated from his community the more sure he becomes that his father is indeed the killer, and in turn he himself becomes a social outcast. In the end, after confirming that his father is the killer, Tyler confronts Don. Instead of turning him in to the police, Tyler kills his father in a way that preserves his image as an integral and loving member of his community.

Tyler’s naiveté is established from the start. The opening lines of Tyler’s voice-over say “The first murder happened before I was born. […] At the time, I didn’t think about it much.” From the very start of the film we understand that Tyler’s arc is pre-determined, that the horrible truth he will confront has existed long before he has. It also reinforces the theme that as someone who was never directly victimized by the violence that Clovehitch represents, he has never had to care about it.

Throughout the film, we see reminders of how ingrained the spectre of Clovehitch is in this town; in the opening shot, the Boy Scouts are seen untying a knot similar to the knots that Clovehitch uses to raise the American flag. Visuals like these build the narrative that the actions of Clovehitch serve as a metaphor for the underlying violence in all the institutions he participates in. This metaphor is further reinforced by the fact that Don is such an involved member of the community In another scene, Don teaches his troop how to tie the very knots that he uses to bind his victims, figuratively passing down tools of sexual oppression to the younger generation. The effects of this patriarchal initiation can be seen in how Tyler’s peers act towards girls their age.

The scene that first introduces Kassi shows Tyler leaving Sunday service with fellow Boy Scout, Billy. When Billy sees Kassi near the church parking lot he angrily says “Just what is she doing? Planning a church shooting or something? […] She’s not Christian. She’s sick.” It’s a little on-the-nose, but this dialogue immediately highlights the hypocrisy and hostility that the Christian community has towards outsiders. Billy goes on to say “Don’t you know she did it with, like, five different football players because her mom left the family to be a stripper?” Billy’s tirade demonstrates how their community is exclusionary towards non-Christians, but more pertinent is his slut-shaming of Kassi. Early in the film’s runtime we get an unfiltered glimpse at how this society’s attitude towards women. The fact that Kassi is not only the target of misogynistic ostracization, but also an indirect victim of the Clovehitch killer, demonstrates how the gendered violence of Clovehitch is an extreme expression of the casual misogyny of the community.

This serves as a metaphor for what many men of my generation experienced in our teen years. The realization of one’s autonomy in being able to resist peer-pressure. This means choosing who they associate with and what they choose to do with their lives, despite what one’s community might expect. Everything in Tyler’s life was decided for him by his father; he goes to church with his family, he goes camping with his father because that’s what his father wants to do, he serves in his father’s Boy Scout troop where his only friends also serve. At the start of the movie he pretends to own his father’s pick-up in an attempt to impress a girl, and this too can be read as Tyler symbolically trying to replicate his father, who to Tyler is an ideal of masculinity. The only version of community Tyler has ever known is what he inherited from Don. Once he discovers the truth about Don, he realizes that this community is something that he cannot tolerate. Despite being in denial for a large portion of the film, by the end Tyler accepts that if he were to ignore his father’s crimes, just as he ignores his friend’s misogyny and religious bigotry, he would be complicit in the murders. If he wants to be free of this complicity, he has no choice but to form his own path in life.

My suburban upbringing was not as isolated, or nearly as religious, as Tyler’s, but there is still something that rings true about the characters who populate Tyler’s community. Growing up, I knew plenty of Billys and Dons. I’m (obviously) not saying I literally know sadists who murder women, but many of us have met some men who are overly-friendly and generous, but who will also say some of the most vile shit imaginable about women when there aren’t any around. To me, The Clovehitch Killer is an extreme personification of this polite hypocrisy. I can’t count how many Billy’s I grew up with; kids desperate to fit in, to the point of excluding others. The women in Tyler’s life are portrayed as mostly passive. His mother has no job and her “hobby” is collecting coupons. His sister, unlike Tyler who is a Boy Scout, isn’t shown to have any hobbies at all. Their passivity, too, reflects a kind of silent sexism that expects women to be less autonomous than men. All of these characters paint a thorough and familiar picture of Tyler’s community. His investigation of his father not only brings him to confront his father, symbolically confronting the most violent elements of his sexist community, but the investigation also brings him closer to Kassi, who ends up being the one true connection Tyler makes, which is essential for his growth and helps Tyler break his biases against women.

Both Tyler’s relationship with Kassi and his confrontation with Don are examples of him expressing his autonomy for the first time. Upon learning the truth behind his community and his father, Tyler begins growing closer with Kassi, a social reject and a victim of his father. Kassi is also the first time we see Tyler interact with someone of his own volition, rather than all the other relationships in his life which he inherited. The scene where Tyler first approaches Kassi comes right after a scene of Tyler attempting to talk to Billy about the porn he found in Don’s truck. Billy immediately shuts him down, telling him “I’m not even going to discuss it. It’s a sin” without even hearing Tyler out. Tyler ends up befriending Kassi, not just because she can help his investigation, but because she is the only person open-minded enough to listen to him. This struck a chord with me, as my adolescence also ended with me finding a new, more progressive community when I went to university. Not coincidentally, this occurred simultaneously to me becoming alienated from a lot of the people who I knew through my connection to my conservative suburban community. The fact that Kassi’s mother was killed by Clovehitch reads as Tyler reconciling whatever complicity he may have had through his connection to Don. In the end, Tyler didn’t just kill his father to overcome his past and to prevent future murders, but also to help Kassi find closure.

When Tyler kills Don, he allows his secret to remain hidden from the community. Part of him still loves the father that he knew as a child, the final lines of the film are Tyler eulogizing Don by saying “The truth is bad things happen to good people. Our only defense is to come together like we’ve done tonight. That’s what my dad taught me through how he lived. Let’s remember that …how he impacted our lives. Dad, if you can hear me …I love you.” From his eulogy, it is evident that he believes that Don’s public persona is necessary for his community, so he prevents them from having to face the reality that he has had to. Unfortunately, by doing this, Tyler deprives his community from experiencing the same reconciliation. The ending feels very cynical, as there is no indication as to what Tyler can do next. He will likely have to live the rest of his life burdened by his trauma and his father’s secrets. The film’s vision of growing up as a loss of one’s communal and familial identity is overwhelmingly pessimistic. The silver lining of the film’s conclusion is Tyler’s relationship with Kassi. It indicates that whatever he may have to go through, he won’t have to go through it alone. If there is a positive message to be had from this film it is that whatever pain we may have endured from the community we were born into, if we are lucky, we can build a better community to help us through it.