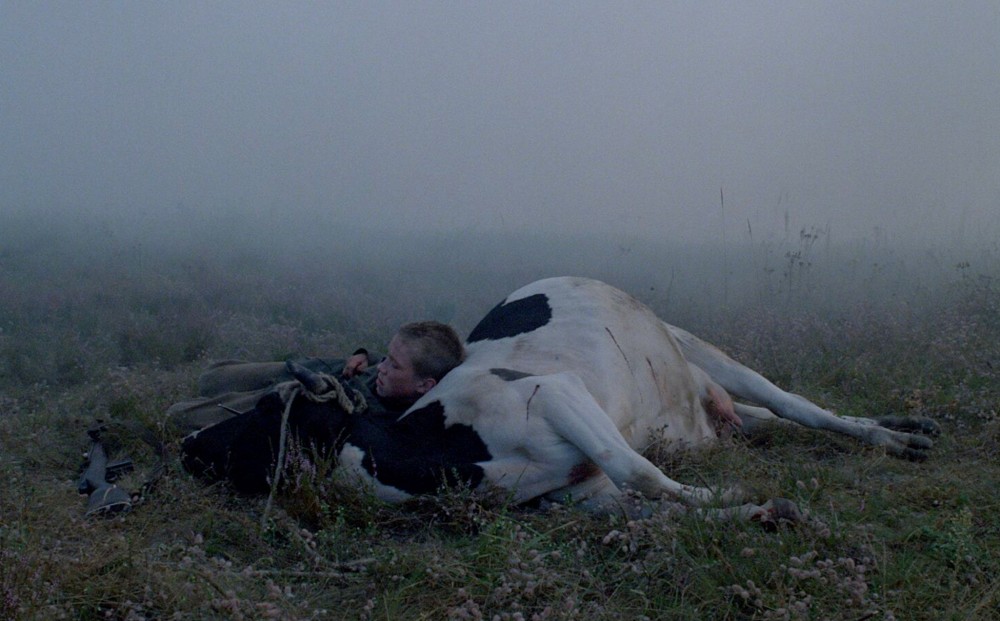 When you grow up in Russia, the Second World War, or how it is referred to there – A Great Patriotic War, is the most popular subject in the media. One reads about it in history and literature classes at school, watches state-produced films about the soldiers’ heroism, and once a year can see a victory parade broadcasted all over government TV channels. Being constantly surrounded by the cultist attitude and the positive sentiment toward one of the most tragic events in the history of the world. I could never understand why recently produced Russian films focused on the ideological concept of the army’s greatness and “we can do it again” rhetoric, rather than pointing out the suffering and pain that any military conflict brings with it. Even though before the mid-2010s Russian war-film genre has been fluctuating between condemnation of war cult attitude and praise of militarization, this paper will not focus on the evolution of Russian cinema and its ideological subtext. My goal is to demonstrate how the coming-of-age genre operates within the context of the Soviet war film, where the protagonist is maturing against his will. In the film Come and See ( dir. Elem Klimov, 1985), the protagonist Flyora goes through a brutal physical and emotional transformation, as his hopes and aspirations of becoming a noble member of the Belorussian partisan group are crushed by the miserable reality of war.

My personal definition of coming of age is a process of becoming an adult, not only physically, but emotionally, often being forcefully removed from the comfortable position of ignorance or a certain worldview by the outside forces. Interestingly, discovering Come and See has been some form of coming-of-age for me. I was only familiar with the director Elem Klimov because of his earlier film from 1964: Welcome or No Trespassing, which has been one of my favorite comedies growing up. Therefore, watching the infamous Come and See with its realistic brutality and ultimate hopelessness has been a shock equivalent to Hayao Miyazaki turning out to be the author of Uzumaki. The vision of the war Klimov presents in Come and See is the complete opposite of what one is used to when watching Soviet or Russian war films. Re-edited by censors, and criticized by the government (which seems to be a running theme in the films I have chosen to write about) the film presents the reality of war, where the “Great Soviet Army” is absent, and the partisan troops are too late to come for the rescue, while the inhabitants of the small Byelorussian village are forced to experience inhumane suffering. Even the title of the picture is a Biblical verse, which references one witnessing the destruction caused by the Four Horsemen of the Apocalypse. Come and See is a complex and meticulously constructed recreation of the war and genocide, where there is only a place for hate, fear, and madness. Not even once in the film do you see heroism or a successful rescue operation, it is a story of suffering and helplessness, where the soldiers are not present and omnipotent, but overflowing with anger. Come and See is also a message to the viewer, to come out of the pro-war imperialist age, and acknowledge that the war is not only about victory, but most importantly about the death and suffering of innocent people.

The film, which is best described as a terrifyingly realistic depiction of literal hell on Earth, follows the young teenage boy – Flyora, who is living in the Nazi-occupied territory of Belorussia in 1943. The director invites the viewer to go through the emotional journey alongside the clueless, yet extremely patriotic protagonist, as his hopes are being gradually destroyed by reality. At the beginning of the film, Flyora happily sets out on his mission to join the resistance army, previously digging up the abandoned rifles from the outskirts of the village. Leaving his mother and sisters alone, Flyora ignores their plead to stay, as he believes they do not understand that he has a noble masculine duty of defending his country. He is portrayed as an awkward adolescent, who does not know how to carry a rifle, yet excessively determined. He invokes an emotion of adoration one has for kids who mimic adult behavior. The trope of the young and inexperienced soldier works well in the beginning, but as the film progresses one can see that there is not going to be an opportunity for the idealistic boy to make friends and become a hero. Even though he aspires to appear as an adult to the other soldiers, Flyora becomes child-like and bitter, when it is decided that he will not be taken away with the rest of the troops. He is brash and vocal, smiling during the motivational speech of the commander, but when met with the real conditions of the war, he is incapable of doing anything except to run and escape from the approaching enemy. Until the very end of the film, Flyora does not even shoot his rifle once, turning from the potential defender of the motherland into someone who needs to be defended. Heattempts to act mature and serious around others, however, when the actual danger comes, he is revealed to be an ordinary teenage boy who has no place on the battlefield. Even though by the end of the film when he seems to finally become an adult, like other soldiers – this involuntary transition has also scarred him for the rest of his life.

Come and See pays important attention to Flyora’s mental deterioration as a response to witnessing the death and destruction of the people and place he grew up in. The coming-of-age for Flyora is coming out of child-like innocence and preconceptions about the nobility of warfare. Perhaps, for Flyora, the expectation of being a partisan soldier is associated with espionage and victory, however, the reality of war turns out to be naked bodies piled up behind the barn, people burning alive while the Nazi soldiers and collaborators are drinking and laughing, raping of women, and the whole village turned into dust. Elem Klimov focuses on the atrocities of war with deliberate precision, recreating the collective image of war based on the stories of people who have experienced it first-hand, choosing a teenage boy to signify the painful transformation from the comfort of his mother’s home to being left alone in the middle of the forest under the fire of Nazi planes. One of the most infamous aspects of the film is how Flyora experiences not only an emotional change but a physical one. Throughout the picture the appearance of Flyora changes gradually from the young cheerful boy to the exhausted old man. He can barely speak or hear by the end of the film, with his face becoming a permanent mask of trauma covered by blood and wrinkles. By choosing to show the war through the character of the young teenager with adult ambitions, Klimov demonstrates the effect it has not only literally but symbolically. The rapid maturing of Flyora does not visually turn him into an adult, but an old man, asking one question: how long does he have left to live after what he has experienced? It is a collective statement that represents many children who grew up during war, invoking a pacifist sentiment against this involuntary and abject transformation.

Perhaps the most emotional moment of the film for me is its final part, which begins with the capture of the Nazi soldiers by a group of partisans from the beginning of the film. At this moment, Flyora is in an almost catatonic state, barely managing to explain who of the Nazi commanders gave an order to burn the barn with people in it. When questioned, the Nazi soldier admits to this action proudly, laying out his ideology in front of the silent crowd. He allowed people to exit the barn, which was set on fire minutes later, if they left the kids inside, because, as he argues “All the trouble starts with kids” and to destroy the nation – one needs to start with the youngest generation. This cruel statement, however, carries out an important message, which is that the only ones who can bring change to the world are children, who will grow up and then come of age, creating something new or destroying the violent structures of the past. The new generation functions as the elements of progress, and to stop this progress one has to either destroy it or guide it in the necessary direction. The response of the angered crowd is to avenge the deaths of their loved ones by burning a group of Nazis and collaborators alive, yet, they are interrupted by the female soldier who starts shooting at the captives to avoid the unnecessary brutality and to preserve the little humanity that is left. When the partisan army is about to leave the village, Flyora, who is supposed to go along, notices a boy, who ironically looks like the protagonist himself at the beginning of the film, staring at the portrait of Hitler. When Flyora looks at the portrait, the sequence of shots of reverse history appears on the screen, taking one on the journey of Hitler’s life up until the moment he is a baby, each shot being interrupted by Flyora maniacally shooting at the picture. Flyora is finally able to unload his rifle, unloading along with it all the emotions that he has been suppressing and is not yet able to fully comprehend. However, when the picture of Hitler as an infant appears in front of Flyora, the boy is unable to shoot at him. The censorship had a lot of issues at this moment, as in their opinion it demonstrated the weakness of the Soviet soldier, who was ultimately unable to defeat the root of Nazism. However, I believe that Klimov intended to demonstrate two things: primarily, that the inhumane acts that Nazi soldiers committed could not be replicated even if it is for “the greater good”, and secondly, it demonstrates the emotional maturity of Flyora. He is no longer viewing the world of war as something desirable, as he realizes that the first victims who fall are not soldiers but women and children. He is not radicalized, but exhausted, willing to fight but only because that is the only option that is available to him now. Perhaps here is the contrast between motivated Flyora from the beginning of the film who would view something like killing child-Hitler as a doable task, similar to how he imagined it would be like to be a soldier. However as soon as he is confronted with the reality, he realizes that not only he is unfit for the task, but he is most importantly unfit for the war in general.

The praise and obsession with war is a part of the Imperialist propaganda that fuels the support for the war in Ukraine among the population of Russia right now. Perhaps, for the generation of people who grew up watching TV shows and state-produced films about war heroes, the war has taken a glossy, blockbuster shape, which some may even find appealing and want to replicate. However, I do believe that even for them there will be a moment to come out of the age of ignorance and blind patriotism, when they finally realize what has been preached by government-owned media. Especially, when right now many Ukrainians are living out the plot of Come and See in real life, while many Russian people remain silent or support the war.